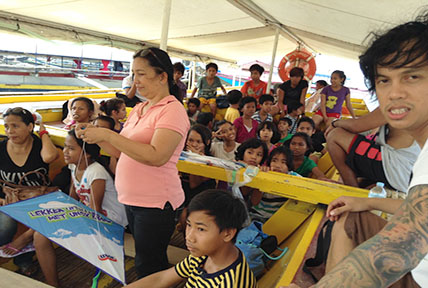 Last April 21, our children went out for boating. For most of them it was the first time and they were really amazed en excited. Days before they were asking all the time what will happen.
Early in the morning all the kids couldn’t wait to hear and see what will happen and when the jeepney came, all of them were excited as if somebody were tikling them. On our way to the port everybody was quiet but with their eyes wide open…. They were curious to see which boat they were going to ride. Kids really enjoyed and were a little bit nervous upon hopping on the boat. When the engine of the boat started some of the kids shouted out of excitement.
The driver of the boat toured us around the lake before we stopped on an island were we had our lunch. Here the kids jumped off the water for swimming when we announced that they could enjoy the water. They were also happy because they could see and catch some fish by their hand. Later we went to the basketball court on that island where our kids socialized with the kids from the island to play basketball and volleyball.
Other kids also enjoyed flying the kite which was also a new experience to others.
This experience was new to most of the kids and I can say that they really had a great day!