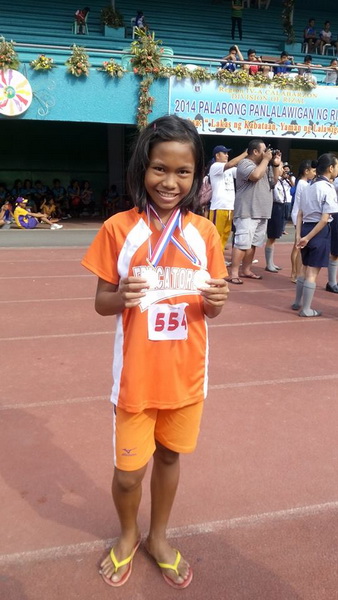 Track and field is a sport which combines various athletic contests based on their skills, particularly running. This includes sprints, middle and long-distance events, and hurdling.

Merlie, one of the kids in Bahay Aurora and as a representative of their school and of Morong Rizal won on the said sports competition held in Marikina Sports Center last November 3-7, 2014. Merlie together with her competitors were gathered on the said place to practice and compete for a week. She got 2 first place on that competition, one is on 1500 meter-run and the other one was 800 meter-run, and by that she received 2 gold medals that makes her happy.

After the event, as she arrives at the Bahay Aurora, kids were gathered at the porch to greet her and to have some little celebration. By winning on the said competition, her schoolmates and as well as the kids in Bahay Aurora were so proud of her.

We hope that in the future, Merlie will be one of those greatest athletes on that said sport and all kids will reach their goals in life to become a successful person as they will grow old and not to forget where they came from.